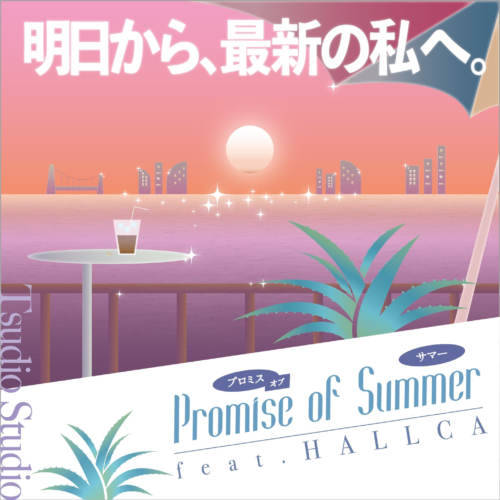 Tsudio Studio has released the single “Promise of Summer,” featuring former Especia leader HALLCA, on August 30th 2020 on the Japanese label Local Visions. Promise of Summer is an end-of-summer themed song that showcases the wide range of expression from both Tsudio Studio and HALLCA. The song received a remix by Dutch Vaporwave producer 猫 シ Corp. Together they came up with the idea of releasing the single on a 12″ maxi single – just like back in the old days.

Tsudio Studio is born in and lives in Kobe. After working as an arranger and mixing engineer, he made his debut on Media Factory as a member of the 3-member band KAZURAMOS. Then in 2018, he released his solo album Port Island on the up-and-coming label Local Visons with the concept of an imaginary Kobe. Later he released his full album Soda Resort Journey again on Local Visions in December 2019.

HALLCA is a vocalist/songwriter from Takarazuka, Hyogo Prefecture, she started as the leader of the girl group “Especia” in June 2012. In 2017 Especia was disbanded and the next year in July 2018, she released her first solo EP “Aperitif e.p.” under the name “HALLCA”. With elements of disco pop, new disco, deep house, and jazz. A year after that  she released her first album “VILLA” in September 2019.

猫 シ Corp. is a Vaporwave producer from The Netherlands and is active since Summer 2013. The music ranged from futuristic mallsoft to nostalgic weather channel mixees. In the past couple years he has been working on a more mallsoft and ambient orientated music.

The wonderful artwork has been made by 膝を舐める, born in Tokyo in 1999, he entered Musashino Art University in 2017.