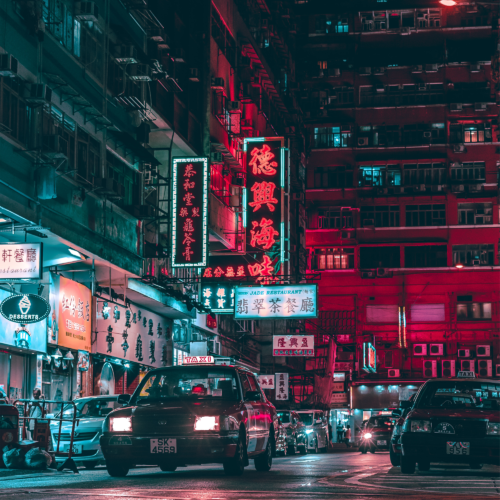 …through the neon dreampunk streets of beautiful Shanghai and bustling Hong Kong.

“沙漠鱿鱼” is a collaboration project between Desert Sand Feels Warm at Night and Uncle Squidz. On their debut album “上海／香港” (Shanghai / Hong Kong) both artists take us to the neon lit streets of Shanghai and Hong Kong, where rain keeps on falling and falling. The sound can be best described as distant melodies and slow evolving pads that are building up to a true dreampunk slush dream.

The album has been produced in 2019 by both artists after they met on Twitter and briefly exchanged messages, they soon found out they both wanted to work on a project. The sound they created is a blend between their existing styles which is heavily based around ambient and slushwave music, taking ideas from vaporwave such as sample manipulation and incorporating them into lush soundscapes. Both sides of the album are dedicated to each respective city; Shanghai and Hong Kong.

Highly recommended for fans of 2814!